A quarter of a century ago!  A snap from the first Philosophy with Children feature to appear on the national TV News in the UK. 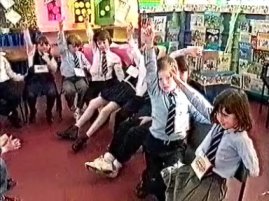 The news presenter was a philosophy graduate from Glasgow University and she was so proud to be the person who first got Philosophy into the TV News.

I had flown back from Poland the night before the filming of the children, having  run an amazing (and exhausting) training session in Warsaw – giving an MA module for The Polish Academy of Sciences.  Using ‘Laura and Paul’ translated into Polish.

And that was extraordinary because it was delivered in Polish. I had a wonderful translator (Barbara Michalec ) who whispered in my ear simultaneously.

Not knowing any Polish at all, but knowing the text and having had years of philosophical dialogues stimulated by that text, I found that I could understand what people were saying , somehow! Then the translation confirmed it.

“Put that box in the bin, Dear,” Mum said to Paul.

Paul picked up the egg box and went to put it in the bin. He looked at the picture on the box. There was a drawing of a hen sitting on some eggs, with a tree and a little building behind it, and a big drawing of the sun.

“Where do eggs come from?” Paul asked.

“From hens,” Mum said. She was busy with the frying pan.

“That’s ’cause they live in the country, Twit,” Laura said.

“No quarrelling both of you!” Mum said. She seemed cross.

Dad came in.” Who lives in the country?” he asked.

“Not any more,” Dad said.” They live in factories nowadays.”

Mum handed out the plates.

“But that hen isn’t in a factory,” Paul went on.” There’s a tree in the picture, and there’s no trees in factories.”

“Hens work in factories!” Laura had just put a big piece of omelette in her mouth. She was so surprised at the idea of hens in a factory that she spoke at the same time.

“Oh Laura, don’t speak with your mouth full like that!” Mum said.

Dad was laughing.” What a pair!” he said and looked at Mum.

Mum smiled,” They don’t exactly work in factories, Dear,” she said.” They are kept in big buildings like factories.”

“In the country?” Paul asked.

“But what about the picture?” Paul asked.

The question was:  “How can a picture be ‘wrong’?”

This question is almost always raised by both children and adults after reading that section; the text is written to stimulate such philosophical questions.

But the dialogue with mature Polish teachers, who had lived and worked under communist rule (or under ‘the Russians’ as they would put it) was quite different than the typical dialogues I had with adults in Western Europe at that time. For these teachers knew all about the use of image in manipulation and deception.

So the philosophical dialogue moved from a picture on an egg box to the nature of power and the role of fear in a tyranny, and that is how McCall’s CoPI method works. My job is to guide participants deeper and deeper into the philosophical concepts and issues that underlie often simple everyday experiences.